The Future of Organic Light Emitting Diodes is NOW

Well… not really alive, but in the near future it’s likely be organic.  “Organic” meaning that it is based on carbon atom technology.  What does this mean?

How would you like to own a transparent TV?  That’s right, a TV that looks like a plane of glass that’s less than 3mm thick.  When it’s not turned on, all you would see is the wall behind the HDTV.  People will get very creative with this concept.  At CES 2013, Samsung is showing this HDTV technology.  When turned on it becomes one of the highest quality 3D HDTV’s you’ve ever seen with contrast ratios in the range of one million to one.  Going a step further, how about if that same TV could be rolled up in a tube and put in a drawer until you want to use it again? Intriguing? Samsung is also showing this technology at CES.

What about replacing your car dashboard with a heads up display?  A heads up display that not only can tell you your current speed and GPS direction but also one that can provide augmented reality, pointing out on your windshield precisely where a particular restaurant is or what stores are in front of the car. Traditional dashboards would become a relic of the past.  The heads up display would appear with the relevant data you need, when you need it. 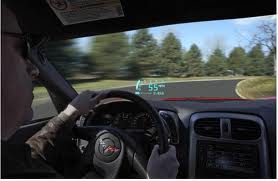 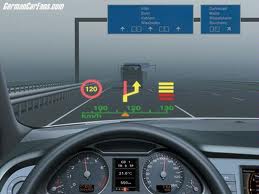 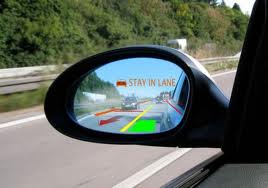 The “heads up” display might also appear on your side mirrors if you’d like that option. Or how about rear and directional lights that are actually part of the metallic body? 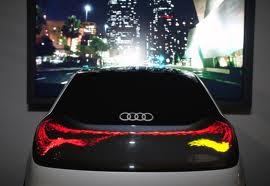 Oh why not… how about a car that is actually a display device? 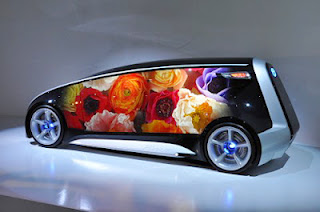 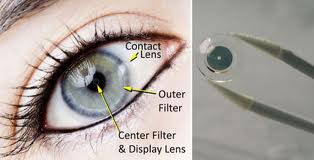 Going a bit further on this theme, what about a heads up display on your glasses like Apple's and Google’s augmented reality displays?   These are displays that really take the HUD concept to the next level.  And why should we stop there? How about augmented reality in your contact lenses?

A proof of concept for augmented reality contact lenses has been accomplished.  This brings a heads up display, literally, right in front of your eyes!  Yes, of course we can’t focus on pixels that close to our eyes but the developers of this technology have solutions for that as well.


Science Fiction?  Not really.  There’s a technology called Organic Light Emitting Diodes (OLED) that will take us to the next level in display technology.  It has nothing to do with holography or even auto-stereoscopic displays.  It’s a technology that’s been around for quite some time.  Luminance in organic material was first described in France in the 50’s and in 1987 Ching W. Tang and Steven Van Slyke developed the world's first working OLED at Eastman Kodak. Today, there’s a great deal of buzz about OLED because it’s likely to become a significant part of our communication, production and entertainment world within the next two years.  In fact it’s already here.  I currently own a Lumia 900 that I consider the best cell phone I’ve ever owned.  Aside from the fact that it’s a superior Windows Smartphone, it’s the brightest display I’ve ever seen and it has the blackest blacks of any phone I’ve had to date.  The image quality is exceptional.  The reason the display is so good is because it’s an OLED display. 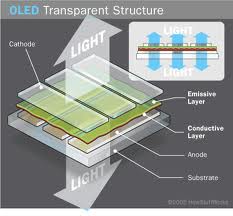 How does it work?  The OLED is typically constructed of either two or three extremely thin organic (carbon based) substrates sandwiched between a cathode and an anode.  Both the cathode and anode can be transparent allowing for a transparent or glass-like appearance when electric current is not being applied.


When fully constructed, the diode is about 200 times thinner than a human hair.  When a minute flow of electrical current (flow of electrons) is applied from the cathode to the anode thru the organic substrate layers, carbon atoms in substrate #1 lose an electron to carbon atoms in substrate # 2.  This creates what’s commonly referred to as a “hole” in the outer shell of carbon atoms comprising substrate #1, which puts it into an unstable state.  What happens next is that the missing electrons move back to the original substrate, filling the hole and bringing it back to a stabile state.  In the process of moving from substrate #2 back to #1, each electron generates energy, which is expressed as a release of photons or light.

OLED technology and displays were the focus of this year's annual Society for Informational Display (SID 2012) conference and apparently Samsung and LGD's OLED TVs were the talk of the show.  In fact, Samsung, LG, Panasonic and Sony have all been devoting enormous R&D budgets to making OLED a flagship product for HDTVs, mobile phones, computer monitors, tablets, laptops, gaming systems, watches, cameras A/V players, lamps, and more.


In fact, Phillips has actually produced an OLED fabric that can be used for home or building décor or even for clothing. Yes, I said clothing!  Smart textiles have already been introduced by several companies and there are web sites dedicated to the collaboration of technology and fashion.   Engineers at UCLA have created flexible OLED using carbon based nanotubes that they claim can bend, swell, shrink, and fold.  Is this a precursor to more stylish OLED clothing that can change color and design electronically?  Could it be, as Dan Nosowitz states in his blog on PopSci, that this could potentially lead to a cell phone that can actually stretch into a tablet when needed?  The remarkable thing is that this technology exists and the many innovations people are considering today are only the tip of the OLED iceberg.

Phillips has also created a transparent OLED white light source that is expected to be in commercial production this year.

Other lighting companies, including OSRAM, GE, LG, Lumiotec, UDC and Samsung have also been working on creating OLED light sources.  Some people have called OLED the light source of the future.  It has very low power consumption, does not generate heat and lasts longer than conventional lamps.

As with any new technology, OLED is not perfect.  It costs much more to produce than a traditional LCD but with some innovative printing technology, OLEDs have the potential to become considerably cheaper.  The design is simple but the process of manufacturing them is very difficult and expensive.  Because of this, large OLED displays are not widely available and the technology is more focused on small-screen applications such as smartphones and hand held game platforms.  OLEDs have a limited lifetime of approximately 14,000 hours for HDTVs to hit half brightness.  Today the longevity of OLEDs has been extended to the point where it’s essentially a non-issue.  OLEDs do not function well in sunlight because it emits light itself.  However, the newer OLED technology such as the Super AMOLED Plus produced by Samsung and Nokia’s CBD displays are proving to be superior to LCDs.  Also, water can easily damage the display so they must be sealed water tight.  These disadvantages of OLEDs are being addressed with literally billions of R&D dollars, with Samsung leading the way.

Of course the advantages or OLEDs are enormous.  We’ve already discussed the flexibility of OLED technology and the potential of having printing processes used for mass production at a reasonable cost.  LCD displays require back lighting because they do not in themselves emit light.  This not only increases the required thickness of the product but also requires considerably more power.  Indeed, OLED HDTVs can be extremely thin, on the order of a few millimeters or less.  Since all pixels in an LCD require backlighting, there can never be true black so the overall contrast of LCD is remarkably less than OLED.  Color saturation is also greatly enhanced with light-emitting pixels as is the field of view.

The future of display technology is looking brighter, more colorful than ever, thinner, flexible, malleable and even wearable.  The potential of 3D monitors in our everyday prescription glasses has become a reality.  I’ll be the very first adaptor!
Posted by Barry B. Sandrew Ph.D. at 4:13 PM