On August 9th, my creative crew and I met Tony Scott at Company 3, a well-known postproduction studio in Santa Monica.  We were there to watch Tony do a final luminance check on Top Gun 3D and to memorialize our wrap of the movie by meeting him for the first time and to take some photos.

We were quite aware of how much he loved our transformation of Top Gun in 3D and we were so grateful that he took the time to meet with us and express his appreciation for our work.  Tony’s initial comment to us as he walked into the DI screening room was, “Legend3D, you guys are f___king awesome!”  He said it with a sense of humor that made us all feel immediately relaxed with him. During that session we had a sense that the guy was special.  There was no ego when he was with us. It was quite the contrary; he was genuine and attentive to us.  Afterward, I commented to the Company 3 guys, who have known Tony for a decade, what a nice guy he is. We were told, “That’s Tony.”

After the session Tony hung out with us, joked with us, signed posters and posed for several photographs. I was fascinated by how very human an A-list director could be. 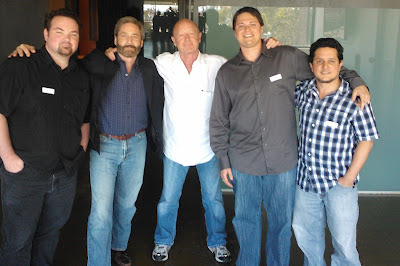 Our thoughts and prayers go out to Tony’s family.  We can only imagine the shock and emotions they are going through right now.  Indeed, they’re not alone.  Everyone in the entertainment industry and the millions of people he touched through his craft feel the loss.  There will never be another Tony Scott.