Would Rembrandt Have Chosen To See Scorsese’s Hugo In 2D or 3D?

Would Rembrandt, one of the greatest artists of all time consider coughing up the theater upcharge to see Hugo in 3D?  After all, he was a master at creating the illusion of depth and volume on a flat canvas using color, light, linear perspective, scale, occlusion and texture.  Surely, if he were alive today, he would be a huge 3D enthusiast.

Or would he?  If you believe Dr. Margaret Livingstone, a well known Harvard neuroscientist and author of Vision and Art: The Art of Seeing, Rembrandt might have preferred the 2D version of Hugo. Apparently, after careful study of 35 of Rembrandt’s self-portraits, Dr. Livingstone concluded that his eyes were unilaterally misaligned, making Rembrandt stereo blind.  Yes, one of the most revered artists in history appeared to have one eye that deviated to the side, which if true, would have made it impossible for him to see Hugo in 3D because he could only use one eye. 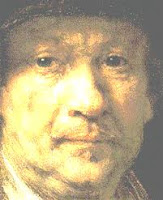 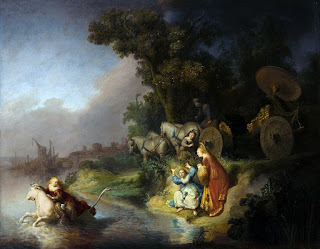 Strabismus Can Be An Asset To The Artist
Then how is it he could have created the exquisite simulation of accurate depth and volume in his paintings? If he were in fact stereo blind, he would have been forced throughout his life to become a master in the use of monocular depth cues.  If true, and monocular vision is all he ever experienced from birth, this visual anomaly might actually have proven to be an asset in his creative work.

Rembrandt wasn’t the only famous artist thought to have misaligned vision. According to Dr. Livingstone, the list includes realist artists Edward Hopper, Andrew Wyeth, N.C. Wyeth and landscape painter Thomas Moran among others.  These artists clearly demonstrate in their work the proper use of monocular cues to simulate both depth and volume

It’s self-evident that artists, particularly those portraying realism, rely 100% on 2 dimensional cues to create the impression of depth and volume. However, what is intriguing is Dr. Livingston’s postulate that some forms of strabismus from birth or that develop in early childhood, might actually be an asset to an artist. 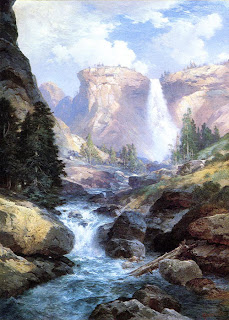 Binocular Vision Is A Liability to A Landscape Artist
On the other hand, binocular vision is of little help to the painter.  If you’ve ever seen a landscape artist attempting to capture a scene in watercolor or oils, you may have noticed the artist closing one eye or even looking at the scene through a single tube.  These strategies force the artist to observe and employ monocular depth cues to create the illusion of depth and volume.  The tube places the subject matter on a relatively flat surface, the retina of one eye.

The oil painting, Waterfall in Yosemite by Thomas Moran, is a fine example of how monocular depth cues provide a wealth of information regarding relative depth between objects as well as absolute depth between the objects and the painter. Moran’s use of linear perspective, relative scale, shadow, desaturation, luminance, atmospheric blur, gradient texture and detail create a scene that clearly has a three dimensional aspect. The possibility that Moran might have been stereo blind certainly shows no effect on his spatial interpretation of this spacious landscape. Indeed, if he had a form of strabismus this is how he would have perceived the world. If Thomas Moran only had monocular vision, it clearly did not hinder his ability to effectively portray depth and volume in oil. 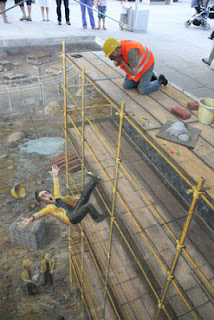 A popular contemporary artist who uses monocular depth and volume cues to create a very unique stereo illusion in 2D is Julian Beever, The Pavement Chalk Artist.  Julian’s chalk art is nothing short of astounding.  Unlike Rembrandt’s questionable binocular vision, Julian’s eyes are aligned and he has perfect stereovision. In his process of creating amazing illusions, he must view them through the wide-angle lens of a 2D camera.  The perspective through his camera provides Beever with a 2D reference for the accurate simulation of 3D.  Consequently, to fully appreciate his art as 3D you would have to view it from the same angle as the camera that served as Julian’s 2D guide.  I suggest visiting the very interesting and entertaining YouTube video in which Julian shows just how he creates amazing images like those below.


Justifying The Upcharge.
Some might conclude that referencing Moran and Beever’s effective use of monocular cues to create a sense of 3D is clear proof that stereo adds nothing to a well-crafted 2D film.  However, I contend that the extra dimension adds greater realism and a special sense of immersion to a scene that cannot be portrayed in the same qualitative manner in 2D.  In my blog Engaged in 2D and Immersed in 3D, I discuss how disparity and convergence can create an entirely unique experience for the movie going audience. Indeed, in the hands of an experienced conversion stereographer, Moran’s Waterfall in Yosemite provides sufficient monocular depth information to create a believable and immersive stereo enhancement of the scene through the proper use of disparity and convergence.  Likewise, a filmmaker can ‘paint’ the impression of a third dimension with 2D cameras via the creative implementation and interpretation of monocular cues, but it takes the addition of disparity to create a truly immersive experience. 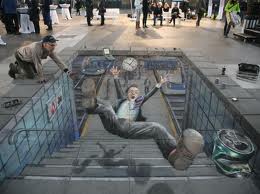 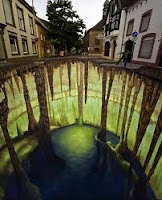 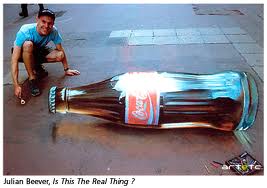 Removal of the Fourth Wall
We study and appreciate Moran’s composition as a creative piece that expresses a sense of realism, separate and apart from the observer.  It engages us as art lovers, but does not immerse us as participants. If we were to convert Moran’s work to 3D, it would take on a uniquely personal perspective.  Indeed, the same composition converted to 3D includes us as part of the image and therefore immerses us in the scene.  Similarly, in a 2D movie we become engaged through a compelling story, believable acting and skillful cinematography.  But in a 2D feature film void of disparity, the visual experience undeniably exists only on the screen.  However, the addition of disparity in a feature film removes the fourth wall, enveloping the entire theater, including us as audience members, in the story and transforming the space in front and in back of the screen into part of our personal space.

Real-time Conversion Removes Creative Interpretation From The Process
There exists automatic 2D to 3D conversion processes that attempt to create the sensation of stereo in the absence of subjective human intervention.  To me this is analogous to automatic color grading or cropping of a feature film in postproduction.  Can it be done? Sure, but can it be accomplished while staying true to the creative intent of the filmmaker? Of course it cannot. Creating depth and volume with camera rigs and conversion are creative processes that simply cannot be automated.  Indeed, our brains are hard wired with inherent expectations when it comes to stereovision. When real-time conversion invariably violates those expectations, it causes confusion and disrupts our suspension of disbelief.

Conclusion
Monocular cues are essential to 3D moviemaking. The more a director and/or stereographer focuses on the creation and placement of monocular depth and volume cues, the more precise and refined the desired stereo will be, enhancing the storytelling.  This is true whether the film is captured in 3D with camera rigs or converted from 2D to 3D.  Indeed, the effective use of monocular cues in realistic paintings, sidewalk chalk art or in stereo filmmaking is dependent on the subjective and creative interpretation of the composition rather than the other way around.
Posted by Barry B. Sandrew Ph.D. at 11:22 AM