Top Gun 3D
Engaging the IMAX & Blu-ray Danger Zones
Building on the success of Raiders of the Lost Ark’s re-release last fall, Paramount celebrated the reissue of Top Gun in 3D last week with a run in IMAX 3D.  To the 3D aficionado, this presented a unique opportunity – an opportunity that I just couldn’t pass up.  One of the tragedies of home video is the lack of scale in the viewing experience that you get in a theater, which makes it difficult to actually compare the theatrical experience to the home with any real accuracy.  Still, with a brand new copy of Top Gun 3D on Blu-ray in one hand and an IMAX 3D ticket in the other, here was an opportunity to compare the 3D viewing experiences, one right after the other. 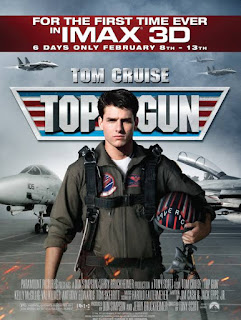 Top Gun has always been an amazing picture for the big screen, with its epic aerial photography shot ‘real’ as much as humanly possible.  Having never seen the movie theatrically before (being 9 at the time the film was originally released), I hoped my first theatrical viewing was going to be AWESOME.
And it was!  The new 4K restoration looks brilliant and consistent.  It was a far better visual experience than Raiders, for me at least, which seemed to run out of resolution on the four-story IMAX screen more often than one would expect.  Top Gun’s aerial photography was as brilliant as ever, made far more so since the planes were now effectively life size.
Strangely though, the 3D was almost a non-factor.  So much of the movie looked flat – the all the important bits anyway.  Bar rooms, establishing shots – essentially those things that held on screen longer is where the pop kept landing, instead of the in-your-face F-14 combat action where I wanted it the most.
So then I went home, somewhat puzzled by what I’d just seen, and put in the Blu-ray 3D version.
WOW!
What a difference!  The carrier deck comes alive with depth.  Cougar’s fighter hangs halfway into my living room.  Cockpit reversal shots have fantastic pop and depth.  If the IMAX 3D experience was a slow simmer, the Blu-ray is a full rolling boil.
To read the entire article including my interview
by Jeff Kleist, click here!